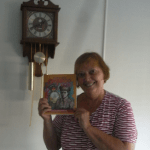 “My Pop was a Kangaroo Anzac” by Deborah Wheeler is a must read for every Australian. Here is a genuine and engaging story of Bill Wheeler, an energetic, innovative, slightly mischievous boy from the bush who declared his love of family and country by defending Australia and the British Empire in the First World War.
A few weeks before Christmas Day 1915, during the height of the Australian summer, Bill Wheeler was one of 80 men who left his small township of Wagga Wagga to protect those he loved by enlisting in the Australian Imperial Forces. Bill along with his friends began their inspiring journey with a 350 mile recruitment march and formed bonds of mateship with another 150 loyal men as they passed through rural towns on their way to Sydney. The final group of 230 recruits became known as “The Kangaroos”. Fighting on the front line near Bullecourt, France, Bill’s right arm was permanently disabled by German gunfire in September 1916. Bill was one of many wounded ANZACS stopping at numerous military hospitals on his journey home to Wagga Wagga where he was greeted with ceremonious cheer and communal gratitude. Finally family love and sacrifice supported Bill on his tenacious journey to a fresh start in Sydney.
Published in 2018, “My Pop was a Kangaroo Anzac” is a refreshing limited edition which opens the familiar door on the astounding chapter of ANZAC history and Australian identity. Readers of all ages become one of Bill Wheeler’s friends escorted on a personal journey of courage and faith. Deborah Wheeler’s warm, uncomplicated and informative storytelling is complimented by Lauren Hakala’s colourful “naive style” illustrations and authentic primary sources such as poetry, correspondence, photos and certificates. This engaging story of Bill Wheeler, one of many Australian rural recruits and archetypal heroes, will open all hearts and revitalise the indomitable ANZAC spirit of joining in, mateship and love of home.
Any Australian bookshelf missing a copy of “My Pop was a Kangaroo Anzac” is like a Pavlova short of the fruit – it is lacking an ingredient essential to identity.
Liz Agnew
Learning Support Officer
January 2019